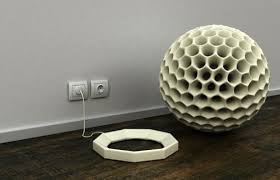 A cross between a honeycomb, a golf ball, and a tumbleweed, the Dustball could one day bounce around an airport lobby near you. Another robot on the Roomba theme, the Dustball's Dutch designer Dave Hakkens sees the device as an autonomous cleaner for public spaces.

After making the rounds, the Dustball navigates back to a dock plugged into a wall outlet where it glows to signify its charging status. The two honeycomb-latticed hemispheres of the bot are attached magnetically – to empty debris the user just pulls them apart. An internal motor blows air through the holes in the Dustball's surface and spurts sharp bursts into spaces where dust needs some dislodging. It moves by shifting weight around two different axis.

But though the rolling cleaner is cool, it might be more art piece than practical tool. A few potential problems seem almost to obvious to wonder how serious Hakkens can be about mass producing this robot.

* Does the Dustball only work on flat surfaces?
* Will it fit into every space – what about under chairs or benches? Or even just proximity to furniture or walls?
* People tripping over the Dustball in public
* How effective will it really be in a large place? Would one train station need multiple Dustballs and would that, in turn, be more of a problem than some extra dirt?

Like the tumbleweed it resembles, if cleaning doesn't pan out for the Dustball perhaps it could roam the Dutch beaches with Theo Jansen's Strandbeest.
Publicado por Nathaniel en 10:32