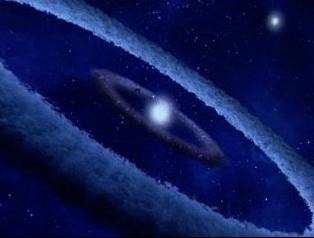 Astrophysicists analyzing infrared images captured by the Spitzer Space Telescope found indications of a dust cloud surrounding a relatively young star. The star is 10 to 16 million years old, and analysis of the dust cloud suggests that it may coalesce and become a rocky planet like earth. It is located at a distance from the star that it may build an atmosphere, collect liquid water, and perhaps, in millions and millions of years, support life.
It took billions of years and the perfect conditions for our Earth to grow and form. Now, those same conditions can be seen in space, shaping a similar planet. Ivanhoe explains this exciting space discovery.

Far, far away, something amazing is brewing in space. Swirling around a giant star similar to our sun, astrophysicists have spotted the very early stages of a planet taking shape.

"What we think we're seeing is the actual formation of a planet -- terrestrial planet -- a rocky planet like the Earth, around the star," Carey Lisse, Ph.D., a senior research scientist at Johns Hopkins Applied Physics Laboratory in Laurel, Md., told Ivanhoe.

The Earth-like planet is about 430 light years away or 2.5x1015 miles from Earth. It's inside a huge dust belt -- bigger than our asteroid belt -- with enough dusty material to build a planet. "The material is forming at just the same distance, or close to the same distance where the Earth formed from the sun," Dr. Lisse says.

To find the planet, astronomers used images captured by the Spitzer Space Telescope. It looks for infrared light or heat radiating from the dusty materials. The images also confirm the rocky fragments forming the new planet are similar to materials found in the Earth's crust and core.

There's also an outer ice belt circling the young planet, making it more likely that water could reach the new planet's surface … and maybe even life; but don't wait around for signs of life. The planet still needs another 100 million years before it's completely formed.

Astronomers say the star the new planet is spinning around is between ten and 16 million years old, which is the perfect age for forming Earth-like planets.

ABOUT THE SPITZER TELESCOPE: The Spitzer Space Telescope was launched on 25 August 2003. Spitzer detects the infrared energy radiated by objects in space. Most of this infrared radiation is blocked by the Earth's atmosphere and cannot be observed from the ground. Spitzer allows us to peer into regions of space that are hidden from optical telescopes.

Many areas of space are filled with vast, dense clouds of gas and dust that block our view. Infrared light, however can penetrate these clouds, allowing us to peer into regions of star formation, the centers of galaxies, and into newly forming planetary systems. Infrared also brings us information about the cooler objects in space, such as smaller stars which are too dim to be detected by their visible light, extrasolar planets, and giant molecular clouds. Also, many molecules in space, including organic molecules, have their unique signatures in the infrared.

WHAT IS INFRARED LIGHT? Infrared radiation is an invisible form of light that we usually detect as heat, like the sun shining on our face, or the warmth of a campfire. It has all the same properties as visible light: for example, it can be focused and reflected. The only difference is that it has a longer wavelength, which means we can't see it with the naked eye. Light is made of tiny particles called photons, and the wavelength tells us how fast those particles are vibrating. The shorter the wavelength, the faster the particles are moving. Shorter light waves look blue, and longer ones look red.

The wavelength of infrared light is so long that we can't see it at all. Any warm object gives off infrared radiation. By checking in the infrared spectrum, engineers can find heat leaks in buildings, doctors can find hidden tumors in the body, and biologists can locate diseased plants in a forest. Astronomers use infrared imaging to detect warm dust around new stars that are not yet "hot" enough to emit visible light.

The American Astronomical Society and the American Geophysical Union contributed to the information contained in the video portion of this report.
Publicado por Nathaniel en 10:42